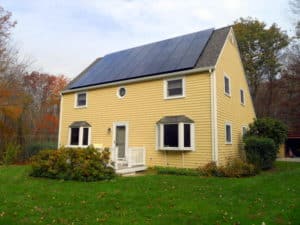 We had been interested in photovoltaic power for several years.  We had interacted with a few contractors, but there was never any follow through on their part.  When we contacted Doug at Newport Solar, he responded positively and with a strong “can-do” attitude.

He made recommendations that we followed up on (remove that tree!) and Doug took it from there.  He handled the paperwork for our grant from the RI EDC, and when that was approved, he handled contacting National Grid.  The actual installation went very smooth.  Doug was up front explaining what was and was not going to be occurring.

As the project wrapped up, he took time to explain how the system operates and how we can monitor it. When there was a monitoring issue about a month after we went online, Doug was accessible and supportive.  The problem was resolved.

Our initial production was satisfying considering that it was the time of year when there is the least amount of sunlight.  We were able to produce about 65% of our total electricity used.  We are eagerly anticipating our results as the sun climbs higher into the sky.

Doug is the consummate professional.  It has been a pleasure to deal with him.